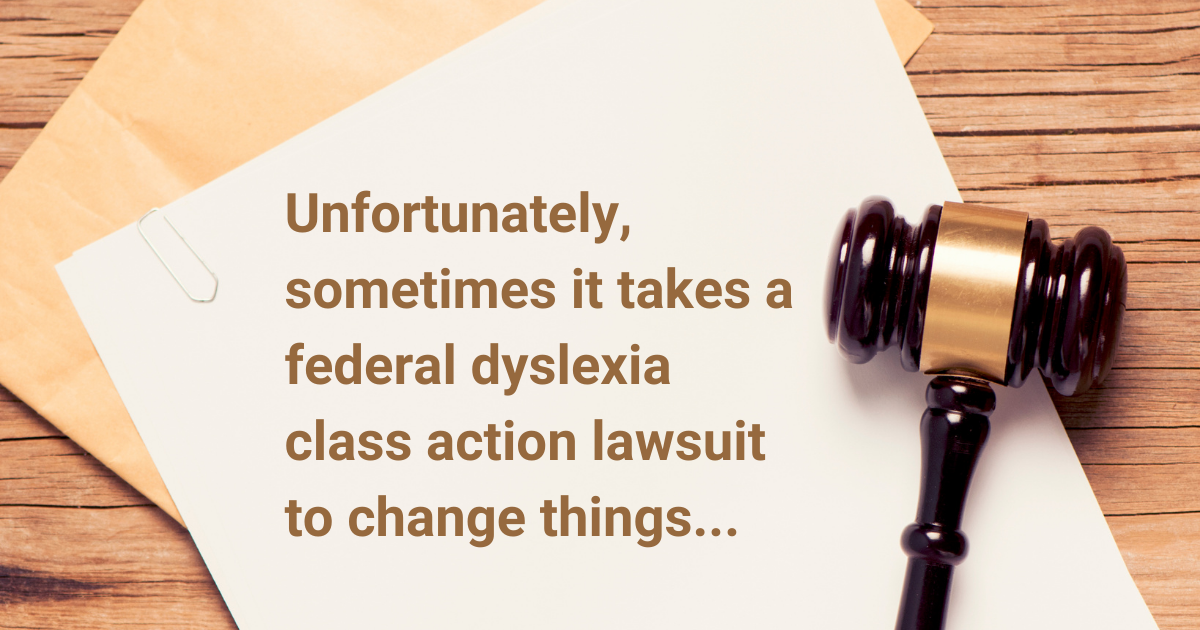 BLOG UPDATE:  Watch the interview on our DDCA YouTube Channel.

On July 8, 2021, a proposed settlement was agreed to in a class action case filed on May 2, 2017, by four current and former Berkeley Unified School District (“BUSD”) students with reading disorders, including dyslexia (Student A. et al. v. Berkeley Unified School District  was filed in the federal court for the Northern District of California, Case No. 3:17-cv-02510). The Court has given preliminary approval of the settlement and has scheduled a hearing for November 4, 2021 at 2:00 p.m.

The students who brought the case claim that BUSD discriminates against and fails to provide students with reading disabilities a Free Appropriate Public Education (“FAPE”), to which they are entitled to under federal and state law.

As a result of this settlement, BUSD will work collaboratively with nationally recognized outside consultants to develop and implement a Literacy Improvement Plan (“Plan”) to improve reading and language arts achievement for all students, and especially those with or at risk for reading disabilities.

°BUSD has selected FastTrack as a supplement to its core language arts program (Tier 1). According to the scope and sequence for the adopted program, BUSD will provide appropriately intensive research-based phonics instruction at a frequency   estimated to be at least 115 minutes per five-day week, including time spent conducting assessments. Its core reading program will be supplemented to be of appropriate intensity in terms of academic English and explicit phonics and phoneme awareness instruction. Language for Learning, Language for Thinking, Wilson Fundations, Systematic Instruction in Phonological Awareness and Phonics – SIPPS and FastTrack are programs named as examples.

°Tier 2 and Tier 3 reading interventions must align with the International Dyslexia Association’s Knowledge and Practice Standards for Teachers of Reading. BUSD has selected Wilson Reading Systems and, for students with suspected reading disabilities,  will prohibit the use of Fountas & Pinnell Leveled Literacy Intervention or Reading Recovery except in “exceptional circumstances”.

Thank you to the team of plaintiff’s attorneys (Jacobson Education Law, Disability Rights Education & Defense Fund, Goodwin Procter LLP, and King & Spalding LLP) who tirelessly worked on an either pro bono basis or at a mere fraction of their legal fees to represent these vulnerable families.

October 12, 2017 – BUSD (“Defendants”) had previously filed a motion, in part, to have this federal dyslexia case (Student A, et al v. Berkeley Unified School District – Case No. 17-cv-02510-JST) dismissed arguing that the individual families involved had failed to “exhaust their administrative remedies before bringing suit” (i.e. each individual family going through due process hearings first).  Plaintiffs successfully argued that they should “be excused from exhausting their administrative remedies because it was futile and inadequate to do so”.  Judge ruled, in part, in favor of the Plaintiffs.

It should be noted that complaints regarding the systemic and unlawful practices and policies at BUSD had been previously filed with the CA Department of Education and that BUSD did not sufficiently change its policies in response to these complaints.

Plaintiffs successfully argued that the issue regarding BUSD failing to educate students with dyslexia was a systemic one and not limited to the students involved in this federal lawsuit and that they are seeking relief on behalf of all similarly situated students at BUSD.

The judge did grant the Plaintiff’s motion to dismiss claims against individual BUSD board members. This dismissal has no real impact on the case.

Thanks to all DDCA volunteers who attended the Motion to Dismiss hearing on August 24, 2017!

Click here to read the original complaint filed on May 2, 2017.

Click here to read the “Order Granting in Part and Denying in Part Motion to Dismiss” filed on October 12, 2017.