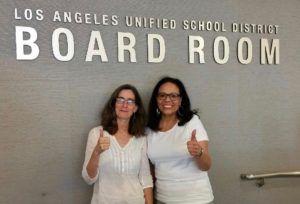 The Dynamic Duo of LAUSD: How two educator/advocate/moms convinced the school board of the largest school district in California to address dyslexia, and what we can learn from their experience.

Longtime educators and Decoding Dyslexia CA (DDCA) Los Angeles Regional Leaders Sherry Rubacalva and Pam Cohen were determined to improve how Los Angeles Unified School District (LAUSD) deals with dyslexia. Thanks to their efforts, the school board passed not just one, but two dyslexia resolutions in less than a year, offering a great example for other California districts to emulate.

Last fall, as many districts do, LAUSD school board members recognized October as Dyslexia Awareness Month with a ceremonial resolution. But they didn’t just leave it there. In the months that followed, they listened to the follow-up requests of Rubacalva and Cohen and other dyslexia advocates who joined them, and responded by drafting—and passing—a second resolution directing the superintendent to come up with a comprehensive plan to update the district’s dyslexia policies, procedures and practices, including staff development, reading instruction, assessments and, “ensure the provision of free and appropriate public education by providing an evidence-based, multisensory, direct, explicit, structured, and sequential approach to instructing students with dyslexia…,” and to report back “within 90 calendar days.”

That second resolution passed unanimously on June 20, with the news reverberating throughout the state.

As a result of the dyslexia resolution, LAUSD moved quickly into action, with the creation of the district’s Dyslexia Learning Group, comprised of educators, advocates and parents that will help the district develop policies and procedures to address dyslexia. They had their first meeting in July, just a month after the passage of the resolution.

A small number of committed advocates making big change in a short time—and getting positive results: This significant dyslexia action, by the largest school district in the state, serves as a great example for DDCA members to emulate in their own districts, and bring to the attention of their own school board members.

Click HERE for the full story from the author. 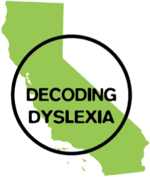 During the September 20th board meeting Res-023-16/17 was presented to the LAUSD School Board.  Read the full text here .  We applaud the LAUSD Board for bringing forth such an important initiative.

To watch this video click on the link below to be redirected to LAUSD.  The dyslexia hearing begins at about 27:00.  You can also click on the “index” and select the 4th item.